The boys in the boat

The boys in the boat is an Olympic story. One of those where you know, before reading, who will get the gold medal. But that, sincerely, doesn’t matter much. Because the key here is the path. The origin. The how. And, also, the why. 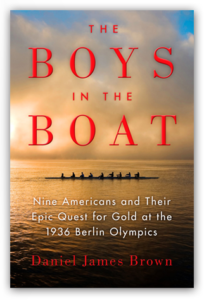 In 1936, the Olympics were still played by amateur athletes. But, in 1936, the Olympics were also a political weapon. And those Olympics Games were happening in Berlin. Daniel James Brown manages to narrate with lots of details how the German propaganda was offered to the world. And how the German rowers, most probably, were professional athletes. Not because they were paid to practice (who knows) but because they were carefully selected and trained to win the gold.

At the other side or, literally, at the other line of the Langer See, the American boat was formed by students of the University of Washington. Students who, during the summer break, went to work at the construction of the Grand Coulee Dam or other odd jobs to get funds to pay their university fees. Students who, to get to Berlin, had to beat the University of California (Olympic champions in 1928 and 1932) during the selection trials. Students who, coming from the state of Washington in the 30’s, had to overcome the stereotype of being provincial, rude, hick, etc.

For most of the readers, The boys in the boat represents the very first time getting involved in rowing. As pages go by, the vocabulary becomes familiar and the tactics such as low rowing frequency turns into a mantra. The reader discovers that the eight is the king’s event in rowing. Because it’s the fastest boat but also because it exemplifies, like no other, what teamwork means.

And this is the point where I wanted to reach: teamwork. The boys in the boat, from its first page to its last one, is an ode to teamwork. Where each person has its function, and everyone know that the rest are supporting them. From Bobby Moch, the coxswain, until Al Ulbrikson, the coach. Without forgetting George Pocock, the builder of sailing shells that could be compared to the Stradivarius of rowing

In a boat of eight, the speed is achieved by two ways: strength of the rowing stroke and frequency. But, governing both, the coordination. This is what they call, in the rowing jargon, the “swing”. The harmony of eight oars entering the water at the exact same moment, push during the same distance and time, and get out at unison. And this is repeated stroke by stroke. Even when it’s painful. Even when it’s hard. Even when all strength is gone. Teamwork.

During this read I have seen lots of parallelisms between Seattle in the 30’s and the current Kenya (or its recent past). Although athletics and rowing have very little in common, the human stories related in The boys in the boat are familiar with some experiences I have in Kenya. With no doubt, this is a best seller book that I strongly recommend to everyone. It was recommended to me by my dad, who has no connections at all with rowing. And he got it recommended by a priest during a meditation. Because the message of this book goes beyond the sport and, reading it, you fall in love with each one of the eight rowers: Don Hume, Joe Rantz, George Hunt, Jim McMillin, John White, Gordon Adam, Charles Day y Roger Morris.